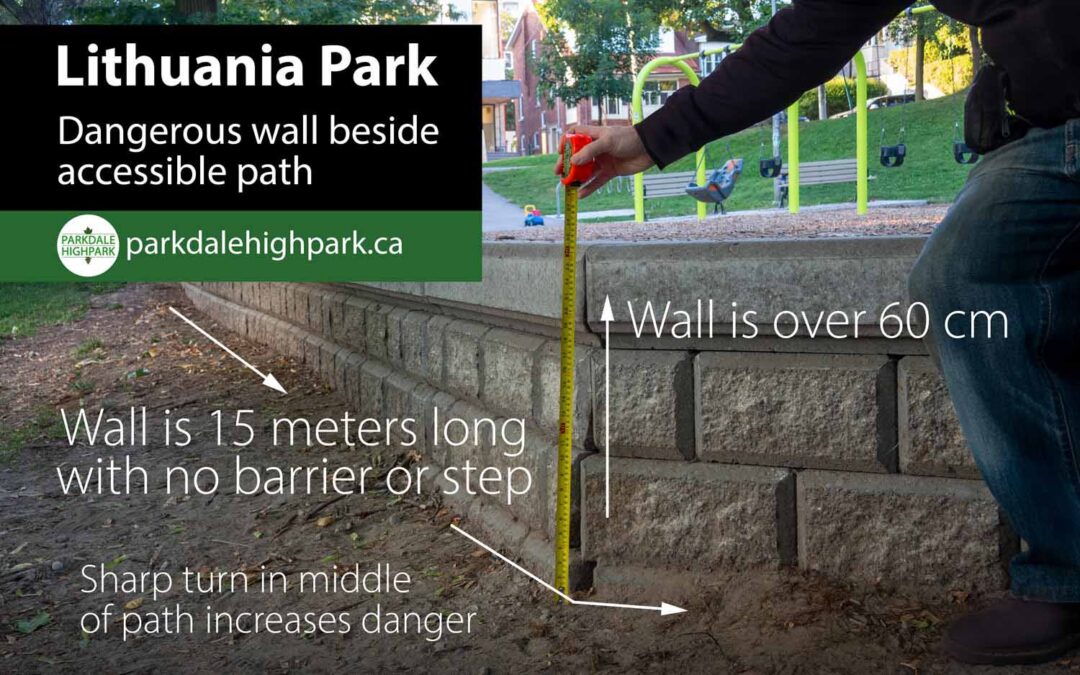 UPDATE: In late 2020 the City of Toronto installed a steel rail barrier on this ledge after complaints from local residents

Do you remember the story of Adi Astl, the Etobicoke resident who built home made stairs in a park? We have a story from our neighbourhood that has echoes of that, including the need for the councillor, Gord Perks, and the City of Toronto to get a dangerous local park fixed. You can help by calling or writing the councillor and demanding a fix.

Background: In summer 2019, a brand new playground and splash pad were opened in Lithuania Park in the west end of Toronto. Situated near Keele and Glenlake Ave in what is called the High Park North neighbourhood, the park is a large beauty with grass and baseball fields, a famous city toboggan hill and a generously sized playground and wading pool / splash pad area.

Shockingly, the accessible path is situated directly atop a large retaining wall. The maximum drop is 60+ centimetres which runs at least 15 metres along this path/wall. This height is illegal and violates Ontario building code.

We ask local councillor Gord Perks to do the right thing and look into this. According to residents, City of Toronto officials have acknowledged the deficiencies in the design yet have not pledged a public review process or timeline for fixing the path.

This path violates common sense. It is too high for a significant great length. Why locate it on top of a retaining wall and then build a sharp curve into it? Whether considering neighbourhood children or other visitors this park presents an illogical design and dangerous condition.

We have reached out to the local councillor Gord Perks’ office, City Planners and the landscape architecture firm, Victor Ford and Associates. We will update you when we have more information.